I braved Manchester’s whirlwind November to represent NPN in the audience, and briefly as a participant, at the Manchester performance of Continent Chop Chop, a collective arts performance by Virtual Migrants in collusion with supporters including Platforma, The University of Manchester and Action Ken Sarowiwa. Inside the redbrick Anthony Burgess Centre we warmed up with a mulled cider but sitting too comfortably wasn’t allowed – Continent Chop Chop is a decidedly unsettling mesh of stories that brings the challenges of climate change, global justice and migration to noisy life. 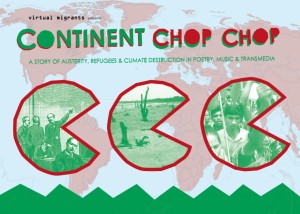 Devised collectively through responses to sources, debates and revelations, Continent Chop Chop is a fluid but meticulously directed interaction between actors, artists, musicians and spectators. Interspersed with sombre ‘climate change bulletins’ its comic segments animate the dilemmas of responding to climate change (are polar bears overused in environmental activism, should we prefer to get sentimental over jellyfish?) There is plenty of room for audience involvement according to anactivist agenda that asks the audience to propose names for the virtual wall of remembrance and feel the fresh anger of Sai Murray’s poem ‘Return’, commissioned to mark the journey of the Bus, the Living Memorial to Ken Saro-Wiwa, to Nigeria. The projection of films (by guest artists Nimmo Bassey and Zena Edwards) dealing with asylum, climate destitution and sexual prejudice onto tactile materials including cloth, a drum, a brick walls and a suitcase allows the impression that the footage is made on the move and makes clear that the shows’ effectiveness is clearly dependent on active audience responses. The score is an original one delivered electronic brilliance by JayDev Mistry and combined with live guitar and spoken pieces from Aidan Jolly and rawly delivered acting and powerful song from Tracey Zengeni. 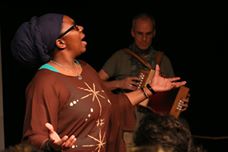 The whole experience, including immediate aftershow interviews with cast and audience, is being filmed throughout the tour by Kooj (Kuljit Chuhan) and will be added to the Virtual Migrants Remembrance Wall, ready to be revisited in response to the urgent questions it raises. Each event in the tour is unique because guest artists are invited and the collective hold collaborative workshops with local organisations who then participate in the production. For this show the partner was Manchester University School of Law, who, while they didn’t feel like performing in person, provided insights into human rights and freedoms that informed the show’s Manchester message.

The last chance to become part of the creative cross-current that is Continent Chop Chop is in London on 3rd December More info here.